Make one camera do the job of two or three. I’ve been thinking about this possibility for a while. And now I’ve figured some of it out.

In this test i’ve captured a couple of my favorite musicians performing at our local restaurant. It’s the Millers on guitar. Robin Miller the father and Eric Miller the son. You can hear the magic as you can see they ‘get’ each other. Almost as if they can read each others musical mind. This song was written by Robin. I think the title is Change in the Weather. It’s a crowd pleasing winner of a song.

Because we now have the ability to shoot in 4K during capture we have a video that’s four times the size of 1080p. What this enables is moving around inside the frame which means we can create Ken Burns movement effects and zoom in for close-ups in different areas of the frame. It’s like having the look of several cameras from a single camera position.

The video below was captured with the Lumix GX8 and the 12-35mm f2.8 lens in 4K. Please don’t worry too much about the color as I shot this on the spur-of-the-moment hand-held while hanging out. The video was processed in Adobe Premiere Pro 2015. 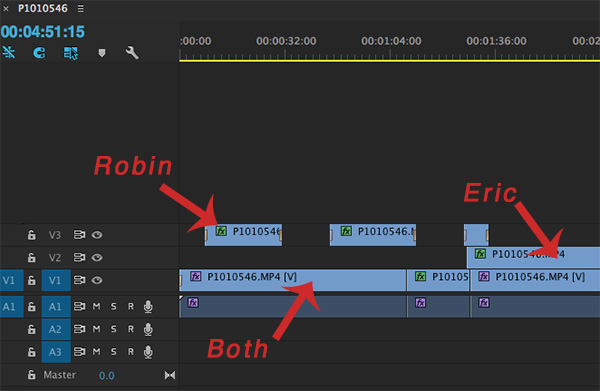 Timeline from Adobe Premiere Pro. I copied the video layer two times and used one of the layers as close up of Robin and the second copy as Eric. The bottom layer was the two of them and the overall stage.

If another camera was added with a different lens you could rove the room getting even more angles and tight detail shots for a full production look to the video. This just practice and play to learn new techniques.

By the way, I would also have better sound in a real production. Sound for this video was captured on the fly by the camera with a little tweaking in Premiere… and it ain’t too bad!

Creative possibilities abound in this new 4K world. What are you doing with it?? Let me know…