I did a webinar for the Professional Photographers of California (PPC) last week. The subject was Photoshop including some ideas on creating art. Check out the Photoshop Party where I shared some ideas on Photoshop Selections, Blend Modes, Single image HDR with Aurora HDR 2019, creating cloud brushes and more… 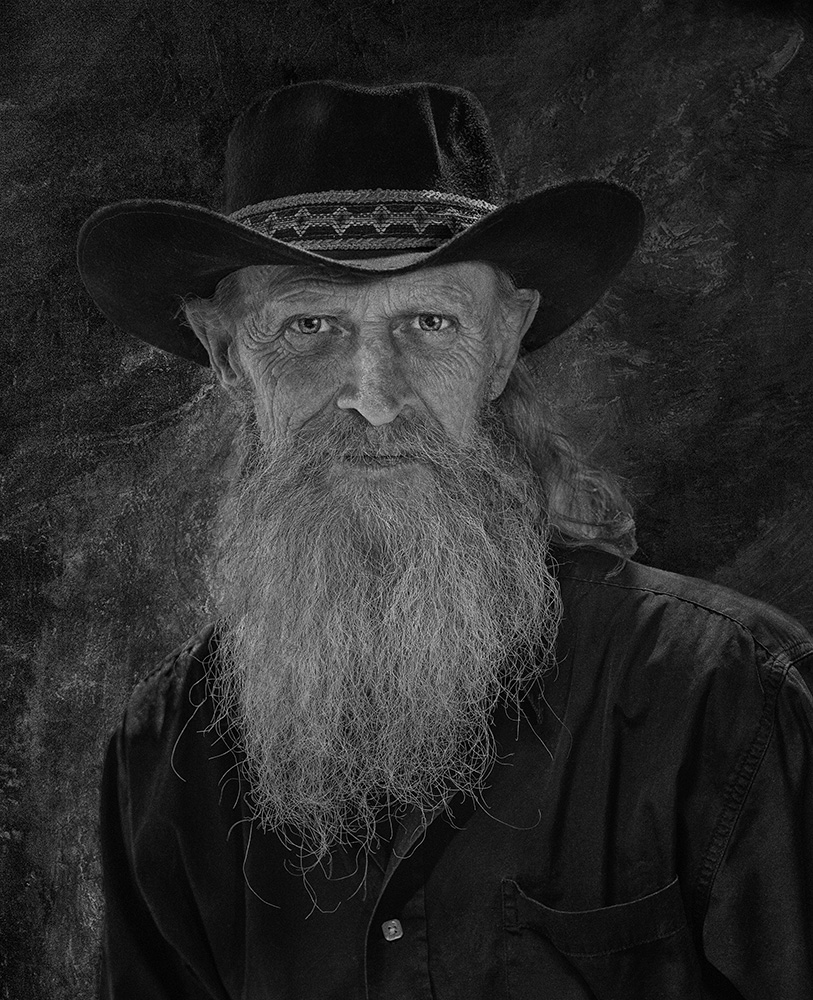 For those that compete (or want to compete) at the International Photographic Competition (IPC) through the Professional Photographers of America (PPA) an important part of the process is presenting your image properly. There are twelve elements on which the images are judged. One of them is image presentation.

Think of it like this. Have you ever had an image that you thought was quite good? Then framed it and it looked even better? That is what you should try to make your image do when putting together your submissions.

Here is a video to give you one way to put together a presentation for a black and white image. This example is showing a double keystroke. The final image could be done with a single keystroke as well. As an artist it is your choice for the color (or tone) of your keystroke as well as the width. Coming soon, I’ll share some ideas on working with color images.

If you have any questions on PPA image competition, don’t hesitate to ask. I wish you the best in your competition journey.

PS – The subject is Craig Christopherson a wood and metal sculptor. See some of Craig’s work here on Instagram. Image was made with the Lumix G9 and 42.5mm f1.2 Leica lens. You can see how I went from the original capture to the final post processed image in my blog on post processing with Adobe Photoshop and Skylum Luminar 4 software. 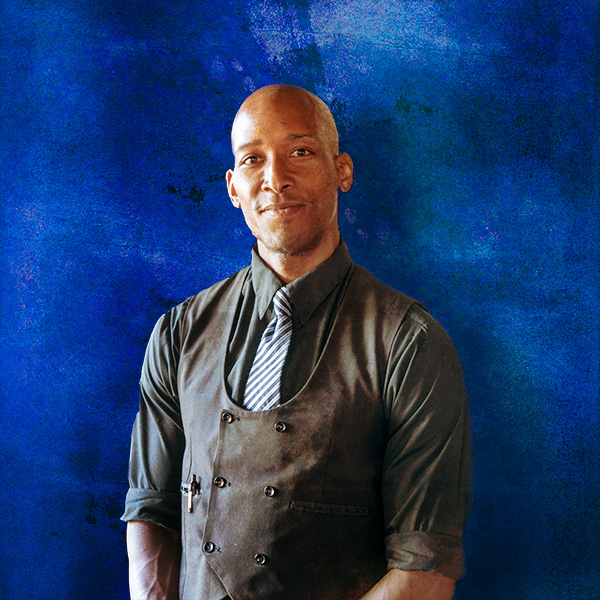 While out to dinner with my wife I was studying, as I always seem to do, the light as it played across the room. I also watch the shadows on faces as people step into different light situations. Ray, the waiter, was standing with the large light source of the front doors shaping his face. I was taken by the way the light split his face. I asked if he would mind stopping for just a moment so I could get a quick capture. He agreed.

While the light and shadow were looking good on him The area in which he was standing left a little something to be desired. In the quest for the best of both worlds I exracted Ray for the scene, he was in and using textures, layers, blend modes and more shadows I created a bit more artistic space for him. As part of this exercise I also placed Ray into a scene I captured near St. Marks Square in Venice, Italy. See the tutorial for more info.

This video was requested by someone who saw the finished product and wanted to know how to accomplish this in post-production.

The image was captured with a Panasonic Lumix LX100 which I call the professional photographer’s point and shoot. Adobe Photoshop was the obvious choice for the completion of the personal project. I am always assigning myself personal projects to experiment, expand my skillset and keep in practice. If you don’t practice your photography and post-production skills on a regular basis, it always seems to be a strain rather than a pleasure to do post-production. Remember that to keep in top form you need to practice regularly, or the rust starts to form quickly. Think about professional golfers coming in from a hard day out on the course and heading straight the putting green or practice range as soon as their round is finished. 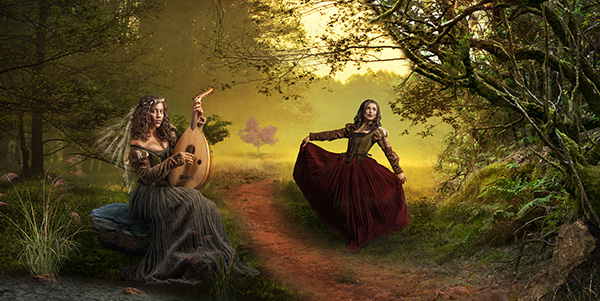 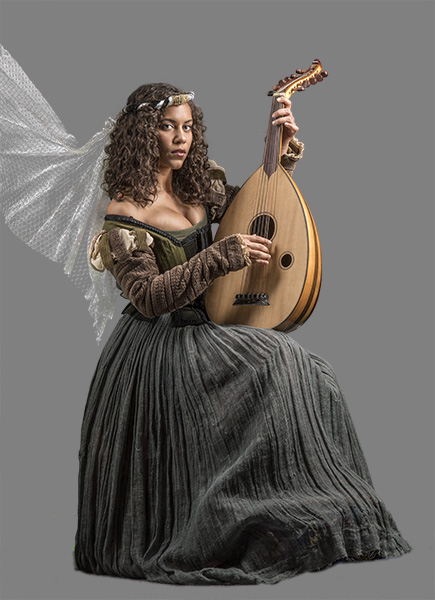 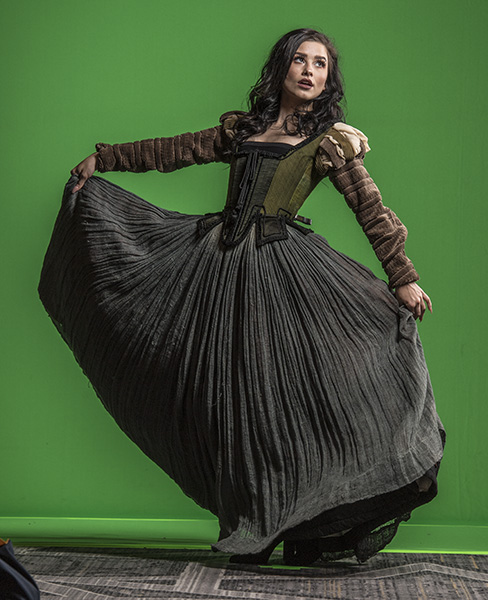 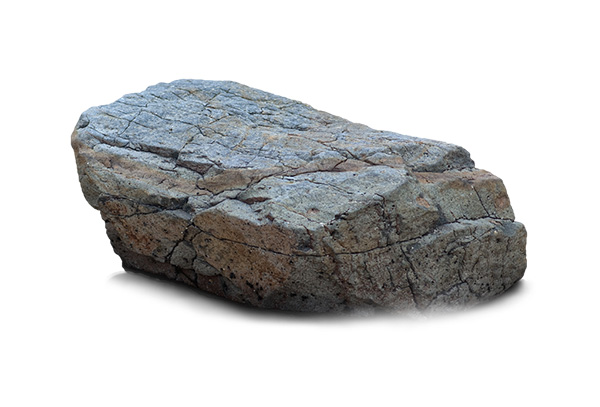 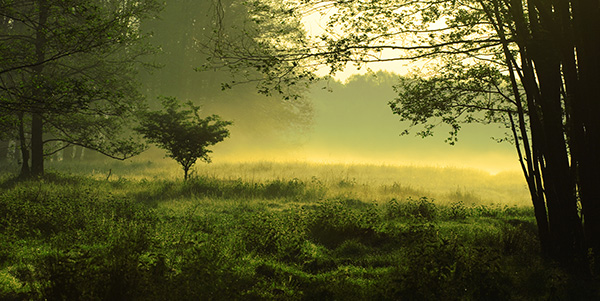 I was on my way to a photo shoot in the evening and saw the moon just starting to peek above the horizon as the light from the fading sun had already dropped below in the west. I grabbed the Lumix GX85 and the 7-14mm f4 lens to see what I might capture in the few minutes I had available. I don’t usually like to rush when a situation like this appears, but duty and a deadline called. 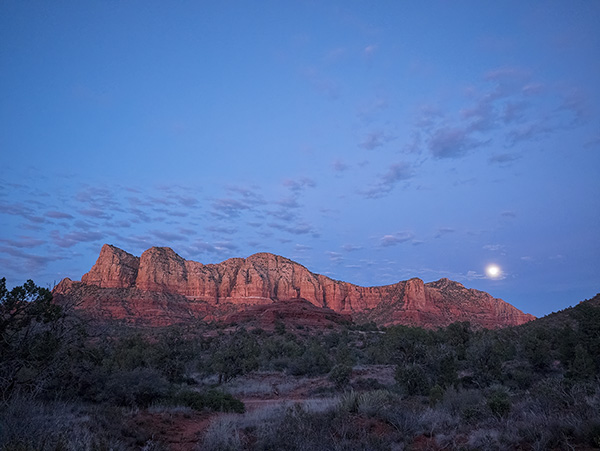 This was the first quick image to make sure I had something in the can.

I first quickly grabbed an overall scene-setting image. Then I tried a couple quick grab shots. I ran down the parking lot to get a better overall view. Having the wide angle lens gave me a lot of the scene but I knew I would need more to be happy.

Nine image panorama capture for further work in post. Note the images have already been adjusted a bit in Adobe Camera RAW

I set up and shot a nine image panorama with the camera in the vertical orientation to gather as much info as possible. Already the light was starting to fade and my job was calling. 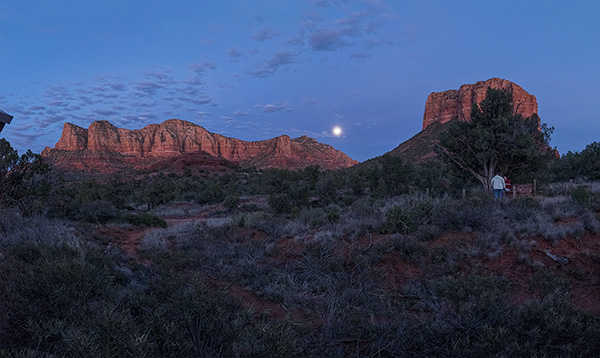 I allowed the Adobe Photomerge tool to do a lot of the heavy lifting for me. I highlighted the images in Adobe Bridge selected Photomerge from the Tools drop-down menu Tools>Photoshop>Photomerge… Layout was set to Auto. The following text boxes were checked. Blend Images Together for obvious reasons. Vignette removal. This was checked because the lens had a bit of vignette and would have made for messy skies. A reason for not checking the vignette box would be if you had files that had no vignette because the files could process faster. Geometric Distortion Correction. You can try working without this but I have found in a scene like this the red rocks would have curved. Content Aware Fill Transparent Areas. When a handheld pano is  made like this there is often areas that don’t completely fill the rectangle of the final image. Photoshop will look around and use it’s best guess to fill the areas. You can check on them quickly as it will also leave a selection around the areas it filled in case you need to make some adjustments. In this particular case, it did a great job. All setings are available for you to play with if you don’t get the exact results for which you are looking.

Post-production is a huge help in these instances to obtain quality images. 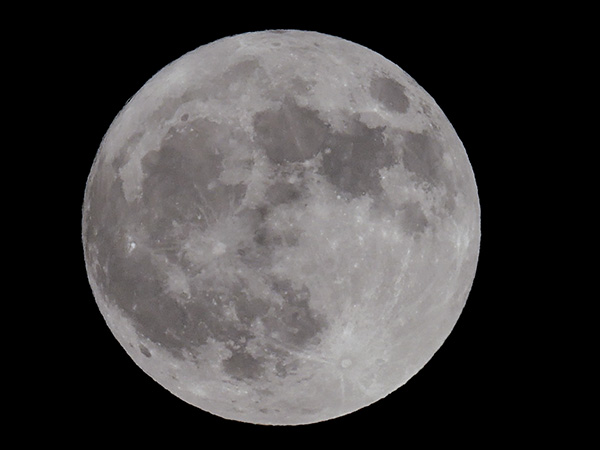 I pulled a full moon from my files as the moon area was blown out. Another case of the eye being better than the camera. If I had more time I would have bracketed exposures to get the detail I needed.

Here’s the final. The moon has detail. The image was cropped to bring attention where I wanted it and
a little judicious Cloning was used to remove the couple under the tree.

If you have any questions or comments give me a shout!

self portrait – under the hood

Anatomy of a self portrait

Sometimes it’s good to push yourself.

I had an assignment from a game of Survivor we are playing in the Arcanum (a place of growing your photography skills at your own pace with a group of like minded folks. Click the link for a peek under the Arcanum’s hood)

The assignment was to shoot a self portrait to help share a bit of who you are. So I decided to make it a learning experience. Here’s the thought process I went though.

First I wanted to give people an idea of how busy it can be in my head. So the title became ‘Under the Hood’.

Set up the photo

Start with a solid head and shoulders studio self portrait. Main light forward and bounced off the wall to get a large source with medium contrast. Two strip light soft boxes with egg-crate grids attached were set to camera left and right slightly behind pointing to skim and add separation and spice to the look. Lumix GH4 camera with the 42.5mm 1.2 Nocticron lens mounted on a tripod with the Wifi activated allowing camera control from my IPhone. I use Paul C Buff lights and modifiers because of the good value, selection and great service when needed.

On to the Photo Art

Then the search was on to search for and create elements that were to tell the story. Inverse square law. Brain. Smoke brushes. Neon signage. “Wait I’ve got an idea, a light bulb went on in my head.” Textures for blending element together. All images were layered in Adobe Photoshop using various blend modes. You can see the Layers and their Masks used to put this together. Got a question? Give me a shout…

Hope this inspires you to take a project and push yourself to a new limit.