I like the fact that you can push the HDR envelope with this software in a very creative fashion. Even better, I like that you can get a realistic image with full density range as well.

Aurora HDR 2017 + 26 presets from Trey Ratcliff for the lowest price ever! 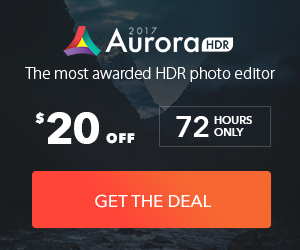 As an affiliate I do a small bit of compensation for you using my links to save money. A win/win with sharing software that I use. Note Aurora HDR 2017 is only available for Mac computers at this time.