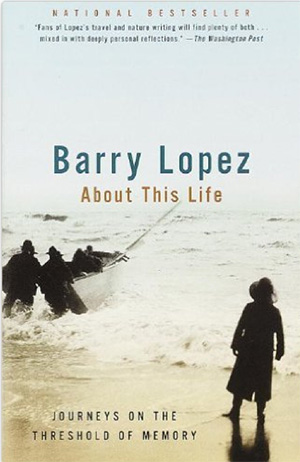 “The… event occurred around the first serious choice I made as a photographer to concentrate on a limited subject. The subject was always light, but I wanted to explore a single form, which turned out to be the flow of water in creeks and rivers near my home. I photographed in every season, when the water was high in February and March, when it was low in August, when it was transparent in July, when it was an opaque jade in December. In 1980 I began to photograph moving water in moonlight, exposures of twenty-five or thirty minutes. These images suffered from reciprocity failure – the color balance in them collapsed – but they also recorded something extraordinary, a pattern of flow we cannot actually see. They revealed the organizing principle logicians would one day call a strange attractor.
The streaming of water around a rock is one of the most complex motions of which human beings are aware. The change from a laminar, more or less uniform flow to turbulent flow around a single rock is so abstruse a transition mathematically that even the most sophisticated Cray computer cannot make it through to a satisfactory description.
Aesthetically, of course, no such difficulty exists. The eye dotes on the shift, delights in the scintillating sheeting, the roll-off of light around a rock, like hair responding to the stroke of a brush. Sometimes I photographed the flow of water in sunshine at 1/2000 of a second and then later I’d photograph the same rock in moonlight. Putting the photos side by side, I could see something hidden beneath the dazzle of the high-speed image that compared with our renderings of the Milky Way from space: the random pin-dot infernos of our own and every other sun form a spiraling, geometrical shape motionless to our eyes. In the moonlit photographs, the stray streaks from errant water splashes were eliminated (in light that weak, they occur too quickly to be recorded); what was etched on the film instead were orderly, fundamental lines of flow, created by particle after illuminated particle of gleaming water, as if each were a tracer bullet.

(Years later, reading Chaos, James Gleick’s lucid report on chaos theory, I would sit bolt upright in my chair. What I’d photographed was the deep pattern in turbulence, the clothing, as it were, of the strange attractor.) “

– Barry Lopez, “Learning to See,” chapter 13 in About This Life