I was asked the question how do you a black and  white image conversion. To steal a quote from Willy Shakespeare, “Let me count the ways…”

That’s kind of like asking ‘What film do you use?’ Or, ‘What are the settings on your camera?’ I use multiple methods depending upon the image and ultimate use of the image. Is it for a fine art landscape? Portrait of a person? Architecture? What are the different colors within the image? Is it being printed on canvas, photo paper, in a magazine or newspaper” All have a different feel and needs… We can now touch every single pixel in an image and control it’s tone Ansel Adams would have been in heaven!

I have an action that incorporates using the LAB mode. Covert to LAB throw away the A and B Channels. (that’s color info) convert to Greyscale. Convert back to RGB. Add a curves bump to taste.

Black and white converter in Photoshop.

Combinations of some of the above methods mixed together for different areas of the image.

Now my Lumix mirrorless cameras have presets that give me results that are repeatable and quite interesting. I shoot RAW plus jpeg to have the information that was presented to the camera and sometimes I will take the camera BW jpeg and also process the RAW and mix them together to get the look I want. 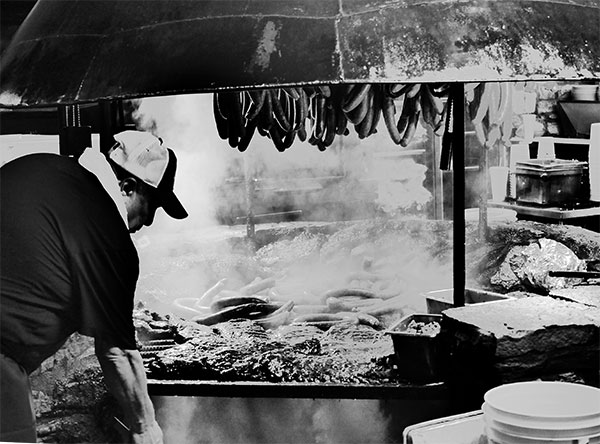 In Austin Texas with the Luminary team. Went to a BBQ place last night. Illustrative Art setting
pushed to black and white on the Lumix GH4

Don’t forget there are more tweaks that can be made to specific areas of an image by dodging and burning. (avoid using the dodge/burn tool in Photoshop! It mashes up pixels. Instead create a soft light layer and paint with black at a low percentage to burn. Another layer paint with white to dodge)

Their could be a whole field of study here just on this subject. I have a two hour program talking about this and could probably do a two day class on this subject called ‘Inspired by Ansel’

Here is a link to some blog posts on black and white shooting.     https://successful-photographer.com/category/photography/black-white