These bad boys do blend in. This was taken during a hike in Sedona with my Lumix GX7 and 35-100 f2.8 Vario Lens. It reached out pretty far and rendered the animal tack sharp. I like how there are so many different textures in the scene.

We see the ‘Trickster’ as the Native Americans refer to them, on a regular basis. This is from Wikipedia – “The name “coyote” is borrowed from Mexican Spanish coyote, ultimately derived from the Nahuatl word cóyotl, meaning “trickster”.[10] Its scientific name, Canis latrans, means “barking dog” in Latin.[11]” 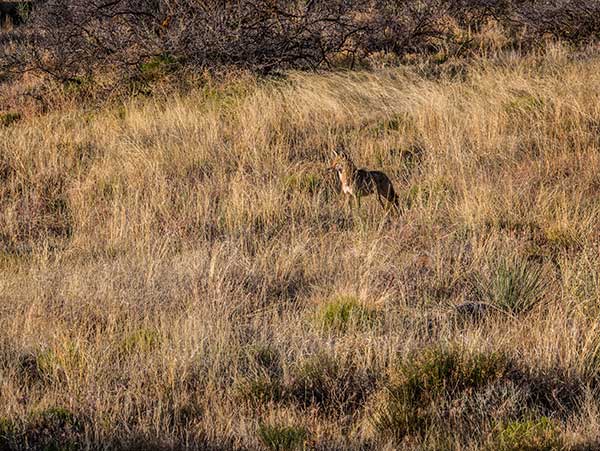 The ‘Trickster’ AKA coyote during dawn hike in Sedona, Arizona

Part of that I believe comes from how coyotes hunt and the fact they have a dual voice-box capable of making many sounds and seeming like there are multiple coyotes when there is only one. The calls a coyote makes are high-pitched and variously described as howls, yips, yelps, and barks. These calls may be a long rising and falling note (a howl) or a series of short notes (yips). These calls are most often heard at dusk or night. You can learn more about the Coyote here.