Wanna get in on the Secret?

Set aside the weekend nights of November 4-5 and think about joining Arizona Professional Photographers Association as we head out on the road again for our annual Fall Fest. Of course, since this will be a limited number of people event seats will be opened to AZPPA members first. If there are still places available they’ll be opened to non-members. If you want to be sure to be included in the event you can become a member and get all the benefits including first shot at signing up for events like this…Page Arizona

Page, Arizona is home to the beautiful slot canyons and while some have become quite busy like the well-known Upper & Lower Antelope Canyons, there are still some off the beaten path places you can tour. One is known as Secret Canyon and arrangements are made to tour this as a part of AZPPA’s Fall Fest.

Here are a couple images I made while on a scouting mission with Bruce Roscoe for the association. We’ll be producing a video with more info but here’s a taste to whet your whistle! 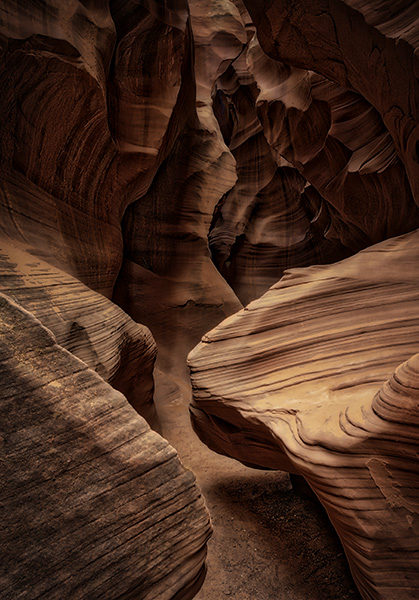 This image was captured with the Lumix GH4 and the Lumix G Vario f4.0 7-14mm lens. Settings were 1/6th sec at f13 ISO 200 14mm (28mm 35mm equivalent) When in low light high contrast situations like this bracketing exposures is almost a requirement and a tripod is a necessity. A great feature with the GH4 is a dial on top of the camera allows you to quickly access the bracket setting. You can be shooting a single image one moment then with two clicks you are in bracket mode. I have mine set for five exposures one stop apart in this situation. This gives me all the information I need to get detail in the shadows and detail in highlights.

Once back in the studio there are several methods to combine the bracketed exposures including Adobe’s Lightroom and Photoshop. If you are on a MAC computer there’s a new HDR software called Aurora HDR from MacPhun which I have been enjoying. I choose four of the exposures to process. Even though I was on a tripod I had the software align the images in order to assure the best results because pushing the shutter button might have moved the images ever so much. After processing in Aurora I did a little dodging and burning to open up a little detail and guide your eye through the image. 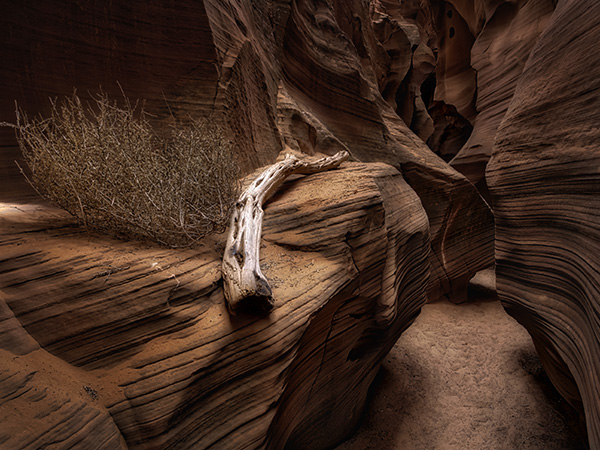 Settings a gear were the same for this image as outlined above. I added a little trip into NIK filter land for a little glow (which could have been added in Aurora) but I wanted a slightly different look and didn’t want to blow out the highlight on the log. I’m still learning the Aurora HDR software or I would have completed the image in there. Sometimes it’s just a little easier to go with what you know but I have been getting better and better results with Aurora the more I work with it.