Roy Williams is a pretty sharp guy. If you haven’t heard about him he’s a marketing guru and Founder of Wizard Academy. He produces and weekly newsletter called the Monday Morning Memo (see below) which leads to an interesting place to explore called the Rabbit Hole. I’ll let you check out the links on your own to find out more about Roy… I consider him a big thinker. A straight thinker and if you haven’t already guessed today’s Photo/Art Quote originated from him. 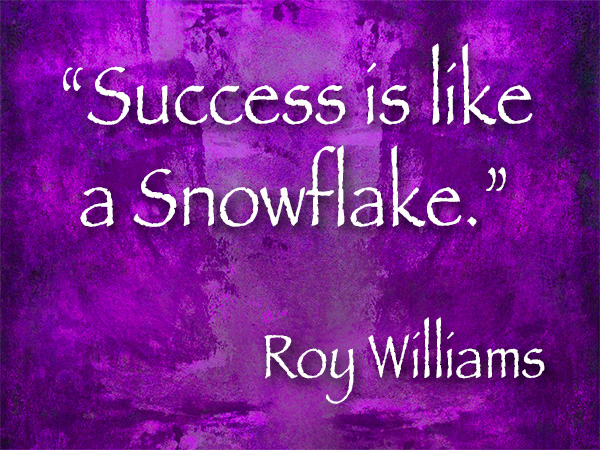 We all would like to be successful wouldn’t we? Success comes gradually. One snowflake at a time. You see one snowflake and it doesn’t look like much. The same in our business and our art. We do some small thing and it doesn’t seem like much. Then another snowflake joins the first. And another. And another. They start to come together to form a mass of snow. And it grows with each layer building upon the first.

The thought here is to start on whatever it is you would like to be successful. Take a step. Create one snowflake. Then a next one. One small step at a time until suddenly you are an ‘Overnight Success’.

PS – What do you want to be successful at? What small step are you taking in that direction today? Tomorrow? And the next? Good luck!

I had an interesting moment a couple of weeks ago.

A client came to Austin for his annual marketing retreat and brought his top lieutenants with him. His company has a couple of hundred franchisees that do about a quarter-billion dollars a year.

Everyone was anxious to hear my marketing strategy for 2016.

“I need you to watch carefully and say nothing for the next 10 minutes,” I told them. “When I’m done presenting my little show you can ask questions, though I suspect I will have answered them all.”

“We’re scheduled to be here for 2 days,” my client said, “and you really think you can answer all our questions in just 10 minutes?”

I put a finger across my lips and turned off the lights. My presentation appeared on the big TV on the wall. Ten minutes later, my client said with big eyes, “How did you know my three favorite movies? Those characters were my idols when I was a kid.”

“You’ve been emulating them your whole life,” I answered. “It’s what attracts people to you and your companies. My plan for next year is simply to accelerate what I’ve been doing in your ads since the day I met you, but kick it up to a higher level.” After I gave them a few examples of what this would look and sound like and told them what I expected the impact to be, they had no other questions.

His lifelong guiding characters were Dr. Dolittle, Willie Wonka and Peter Pan. The female version of this character would be Mary Poppins, of course. They don’t live in a magical world, but magic follows them wherever they go. They bring the magic with them.

I decided to do it again last Friday. A woman you’ve seen many times on television arranged for Princess Pennie and me to give her a private tour of the campus before she and her associates walked into the Toad and Ostrich pub to hang out with Daniel Whittington and whoever else showed up that day.

You never know who’s going to be at the Toad on a Friday afternoon at four. Sometimes it’s 3 people. Sometimes it’s 20. But the only person who showed up that day was our friend, Gene Naftulyev. At the end of the evening our celebrity guest asked one of her associates to snap a photo of her with Gene. She put her chin on his shoulder so they would be cheek to cheek as she wrapped her arms around his chest. Startled, Gene beamed like a five year-old on Christmas morning. Click.

I’m fairly certain he’ll have that photo printed in poster size and mail a copy to all his friends.

During our walk around campus she spoke of the challenges she faces in forming a clearly differentiated identity for a new brand she has launched.

I pointed out that her public persona was merely the never-ending echo of a certain iconic character the public has always loved. My suggestion was that she allow her brand identity to be guided by the values and quirks of that character.

Weirdly, she had never consciously realized the story she’s been echoing for years. You could see the gears beginning to spin behind her eyes. “Oh my God,” she exclaimed, “This solves everything.” A highly memorable and sharply differentiated brand flashed into existence in a twinkling.

“Oh my God, this solves everything.”

She has always been the science nerd that everyone sees as “just one of the guys” until she takes off her ugly glasses, shakes her head, a button pops open at the top of her blouse and BOOM, she’s a bombshell.

Dual identity: science nerd and sex goddess. We’ve seen this character a thousand times and we always love her because she’s the worthy but unnoticed underdog who finally gets what she wants and deserves.

Can you see how the guiding hand of this identity – along with a couple of other characteristics I opted not to tell you about – could help to refine the style and voice of a brand?

Everyone has a story.

I don’t mean a story about them, but a story that shapes them. A story that sits in a canvas sling chair, offstage, invisible, affecting all their choices and actions each day like the director of a movie.

Who sits in your canvas sling chair? What story do you echo without knowing it?

I talk a lot about my own stories: Don Quixote, the Wise Men who followed a star, A Message to Garcia, The Old Man and the Sea, Henry V at Agincourt. What few people realize is that each of these stories revolves around a single theme: unconditional commitment to an objective no one else can see.

Dulcinea was important to no one but Quixote.
The star of Bethlehem was meaningless to everyone except the wise men.
Garcia set out to find a General whose location no one knew.
The old man kept fishing although he had caught nothing for 84 days.
Henry V believed in his ragtag band of men when everyone else thought they were bums.

Examine your own favorite characters.

See what they have in common.

Prepare to be impressed with what you learn about yourself.

And if you are wise,
you will allow that character
to bring all the facets of your company
into alignment.