I love this quote! 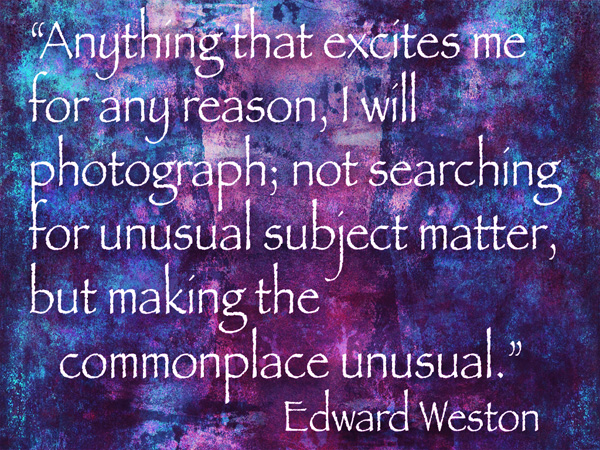 “Anything that excites me for any reason, I will photograph: not searching for unusual
subject matter, but making the commonplace unusual.” – Edward Weston

After learning that I live in Sedona, Arizona people often comment, “Oh! That’s such a pretty place to photograph!” Yes it is but it’s not the place that makes for great photographs it’s the mind and skills of the photographer. Believe me I’ve seen plenty of not so beautiful images made of the red rocks taken in less than stellar lighting conditions that impressed me not a bit. But have seen absolutely stunning photographs of the mundane such as Weston’s pepper image. Please don’t think you need to travel to exotic locations in order to create beautiful images. Start looking around closer to home to capture the unusual. Show ordinary subjects in extraordinary ways. It will push the creative envelope for you.

Edward Henry Weston a 20th-century photographer and has been called “one of the most innovative and influential American photographers…” and “one of the masters of 20th century photography.” Over his 40 year career Weston photographed an increasingly expansive set of subjects, including landscape, still life, nudes, portrait, genre scenes and even whimsical parodies. He truly worked by the thought shared in his quote. I’m finding the more I have my camera with me, made more convenient by using the smaller, lighter Micro 4/3rds format cameras from Lumix, the more I am finding interesting things in my world because I am able to capture an image immediately and explore it rather than think, “That might make an interesting photograph…” and never see the same lighting situation again.

What are you exploring in your world??

Yours in Photography,      Bob