Stalwart entertainers Tom and Shondra did a show at Sound Bites Grill here in Sedona, Arizona. These guys (I use that term loosely) do a highly energetic show that the audience really gets into. Steve asked me to photograph them for the ‘Wall of Fame’ and it was my pleasure to do so! Even though it is only two performers I thought their energy needed more than just one photo to help tell the story… This is what I put together. 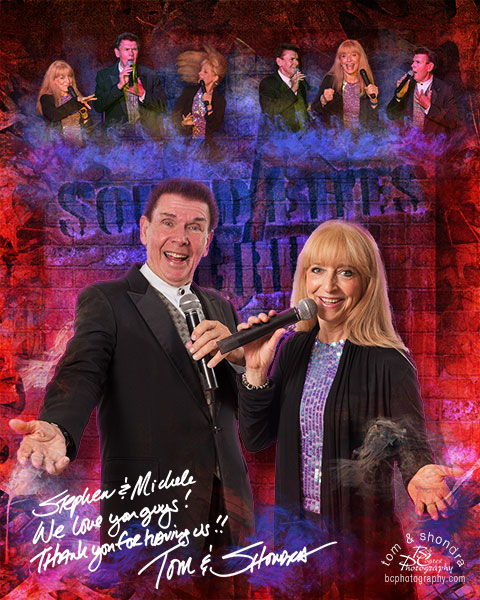 Tom and Shondra on stage at the Sound Bites Grill Wall of Fame image.

The Lumix GH3 worked well for capturing Tom and Shondra’s performance. Because their expressions changed quite rapidly during the live performance I used the 5 frames per second bursts to have choices. I used the Lumix GH3 for this shoot because I sent the Lumix GH4 in for service… not that there was anything wrong but more of a precautionary measure.

I was photographing along Oak Creek and went to cross the creek and slipped on the rocks and the GH4 was submerged while I was trying to right myself which took long enough to put water into every available opening in the camera. I dried it off as much as possible at the scene and then headed for home. I dried it more. Got out the hair dryer and searched for moisture in every compartment. I kept rotating and finding more water but with the heat on medium and I made sure I got every drop I could. The camera turned back on and operated wonderfully. But I sent it in for a chek-up and all was well. The weather sealing on that camera is better than I thought. I still don’t recommend submerging your camera to test it like I did. But it showed me we should be pretty good in a moist environment…

Multiple images were put together using Adobe Photoshop CC 2014 using blend modes, textures and masks. I also added some smoke with brushes that I obtained from Woody Walters who is an amazing Photoshop artist and instructor. Go check out his stuff. (I don’t receive any commission from Woody but I can save you 15% if you decide to sign in for more than his free Photoshop tutorials use coates15) He has amazing info to share with you!

Remember using links from this site help support the sharing of photography knowledge.