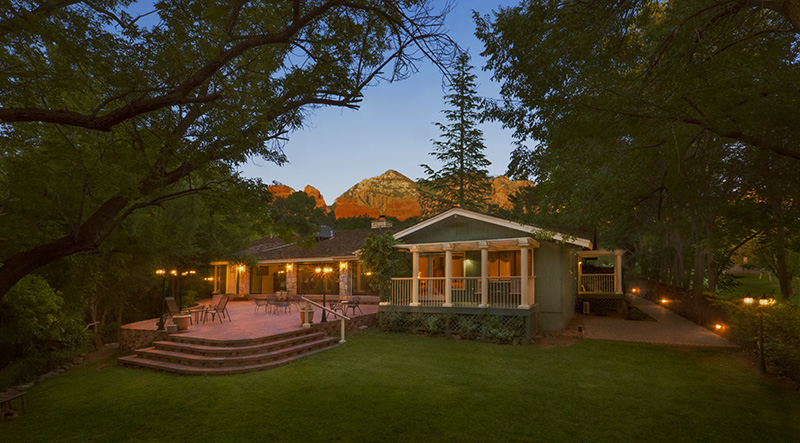 In order to accomplish this look for people who are trying to promote their properties I make a time based image. What do I mean by that? I create a series of images over a period of time from just before sunset until after the sun has sunk below the horizon. This allows me to show the best features of a property by blending them together. Photos taken before the sun goes down allow me to show detail in the building. Images taken after the sun starts to go down allow the sky to record as the cobalt blue and images made after the sun has disappeared show off the lighting and allow the warm glow to come from the windows.

In this particular image I needed a high angle to show off the deck so the camera was placed on top of a light stand about 12 feet off the ground and wasn’t the most stable platform to shoot from. Because of that I didn’t want to touch the camera to get exposures so I used two features on the Lumix GH3 * that helped immensely. The first was a 7 stop bracket setting to grab a number of exposures from each time I fired the camera. The other was the on-board WIFI in the camera that allowed me to control the camera using my I-pad. The 7-14mm f4 lens really kept the lines straight on the verticals. To say I’m happy with the micro 4/3rds cameras would be an understatement!

After the images are captured then it’s off to the computer to assemble the finished piece.

Here’s a reminder that I am available for one on one or group Adobe Photoshop classes to help you get the ‘HERO’ images for your clients. As I am also a Panasonic Lumix Luminary you can contact me to see if I can be brought in to speak before your photography group paid for by Panasonic. Drop me an email with your contact information and request or give me a call to start the process.