Man I gotta tell you I had a great night last night. Dinner with my wife Holly at Sound Bites Grill while listening to the music of Eric Miller and Ralf Illenberger. We ended up staying for all three sets because the music was soooo good.

We’ve heard Eric play in many different configurations with all kinds of musicians. I’m beginning to think he’s the ultimate musical chameleon. I’ve seen Eric playing in a rock and roll band, with a symphony, doing stage shows, a bit of opera, flamenco, composing and playing almost all the parts on a CD and much more. He has been collaborating with Ralf on a new album and they were debuting some of the new songs. I can’t wait for it to be released! They both bring lots to the project. Ralf was a pioneer in creating a unique guitar sound to the world back in the 70’s. Kind of a new age, fusion and fingerstyle all wrapped up in one sweet package. Eric brings his guitar skills and a voice that sounds remarkably like Sting – only better. Add the new lyrics and this is going to be a fantastic album. Watch for it! 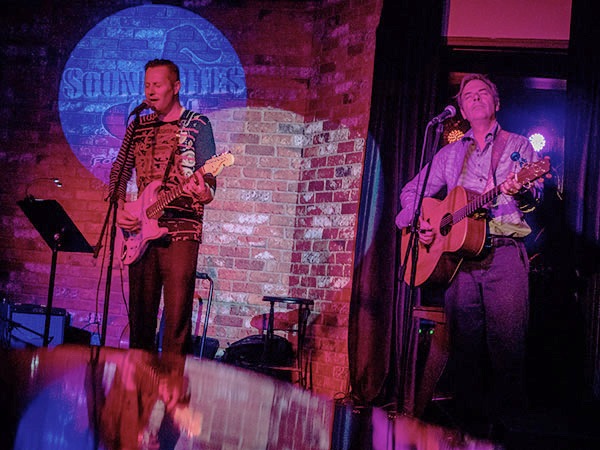 Eric and Ralf live on stage at Sound Bites Grill. Both excellent musicians but the sum of the parts is much greater in collaboration!

Image captured with the Panasonic Lumix GH4 with the 35-100 f2.8 Lumix Vario Lens. Table in the foreground adds the reflection.

Please remember purchases made through links help support this site and the information shared here.